According to national estimates calculated with data released by the Federal Bureau of Investigation (FBI) in September 2018, law enforcement agencies across the United States made 52,000 violent crime arrests involving youth under age 18 in 2017, compared with 75,000 arrests in 2010 and as many as 150,000 youth violence arrests per year in the mid-1990s.

The FBI’s Uniform Crime Reporting series tracks violent crime trends using the four offenses of murder, rape, robbery, and aggravated assault. According to the FBI, youth arrests for these offenses grew one percent between 2016 and 2017.

When measured in per capita terms, or the number of arrests controlling for the size of the population, the effect of the 25-year decline in violent crime is clear. In 1993, a peak year for violent crime, police agencies nationwide reported about 13 under-age-18 murder arrests for every 100,000 youth ages 10 to 17. The youth arrest rate for murder dropped 79 percent between 1993 and 2017. Youth robbery arrests were 70 percent lower in 2017 than the peak year in the mid-1990s, while aggravated assaults for youth also fell 70 percent. Other offenses experienced similar decreases. Arrest rates for serious property crime plummeted 76 percent since the 1990s peak. The youth arrest rate for weapons was 73 percent lower and the drug offense arrest rate dropped 57 percent.

The two highest-volume offenses in the violent crime category—i.e. robbery and aggravated assault— dominate the overall trend in youth violence. Between 2016 and 2017, under-18 arrest rates for robbery and aggravated assault were nearly unchanged, growing just 0.3% and 0.2%, respectively. Together, those two offenses accounted for more than 47,000 of the estimated 52,000 under-18 arrests for violent index crimes in 2017.

Recent increases in arrests for murder and rape, on the other hand, merit close attention. Between 2016 and 2017, law enforcement agencies nationwide reported a three percent increase in murder arrests and a six percent jump in arrests for rape. Due to the relatively small number of arrests involving these two offenses, their combined increase represents a change of just 200 arrests nationwide during the entire year. The per capita arrest rate for murder, however, was 6.8 percent higher in 2017 than in 2016 (2.7 versus 2.6 arrests per 100,000) while the youth arrest rate for rape grew 4.2 percent (11.6 versus 11.1). Compared with the recent low point in 2014, the youth arrest rate for rape was 18 percent higher in 2017. 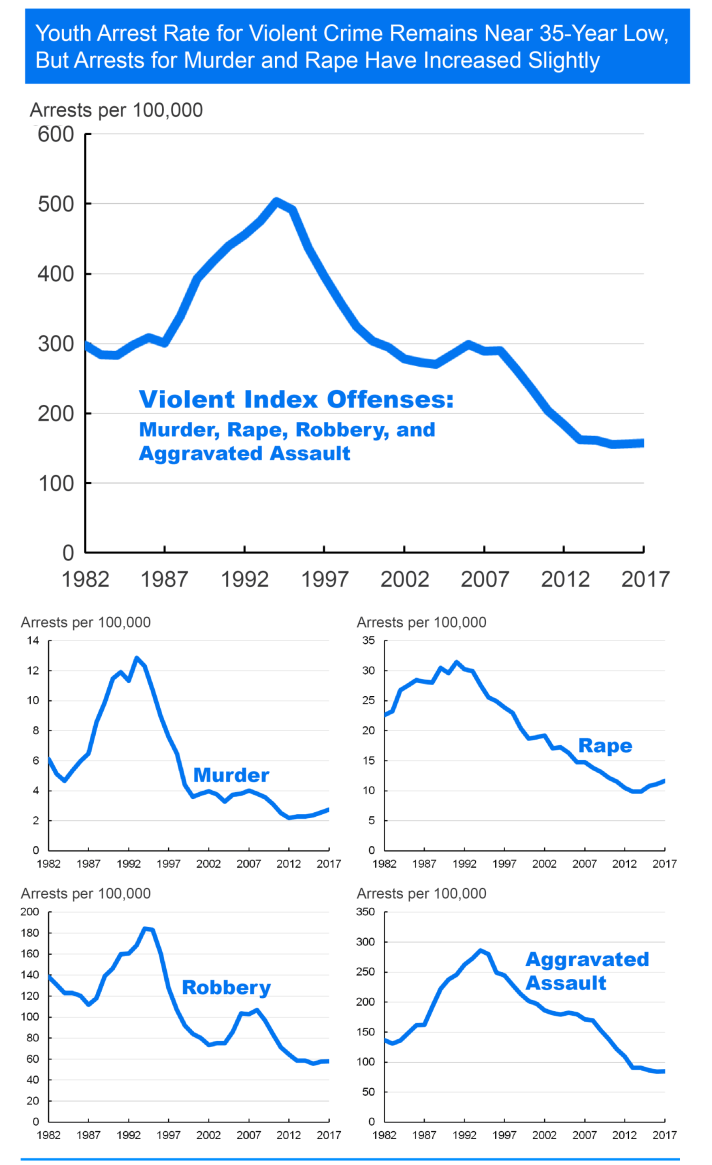 __________________
DATA SOURCE:
Arrest estimates were created with data from the Uniform Crime Reporting program of the Federal Bureau of Investigation (FBI) and age-specific population estimates obtained from the U.S. Census Bureau. Arrest rates before 2015 were calculated by the Bureau of Justice Statistics (BJS) while 2015-2017 rates were calculated by John Jay College directly from FBI reports using the same estimation methods adopted by BJS. Unlike BJS, however, John Jay College calculates youth arrest rates using the population ages 10-17 as the denominator. Arrest estimates for rape were adjusted to account for the FBI’s 2013 redefinition of rape. Pre-2013 estimates of rape arrests were weighted by the average ratio of total rape arrests using the new versus old definition of rape between 2013 and 2017 (1.377).