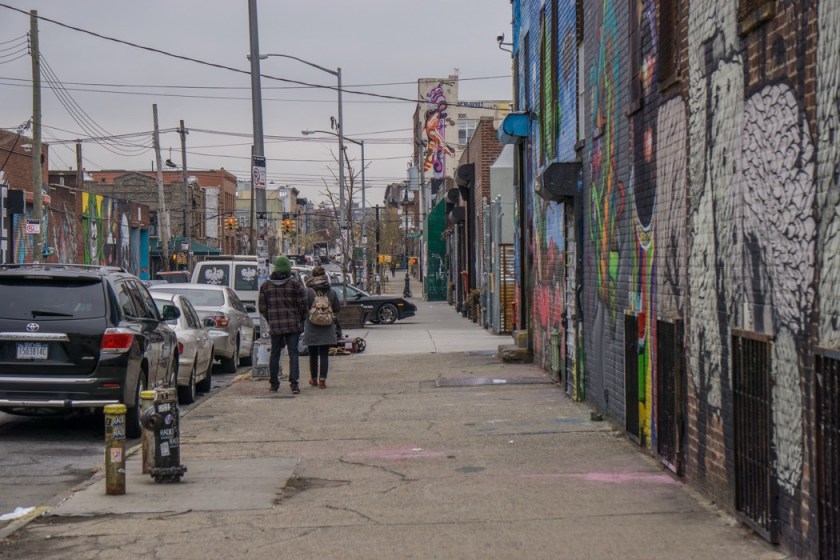 For Rohan Levy, the line between life and death came down to a teenage gunman who mistook the 15-year-old boy’s friend for a rival gang member.

The charismatic Brooklyn teen, with his bright smile and exuberant laugh, was joking with two friends just a half block from home when he was mortally wounded by four bullets from a .380-caliber pistol last Feb. 20. One of his friends, police say, was wearing red pants — leading to the incorrect assumption that Rohan’s pal was a Bloods gang member.

“You never think you’re going to get shot for no reason whatsoever,” said Rohan’s uncle Patrick Smith, 57. “But living in Brooklyn, bullets have no names and no eyes.”

In many ways, Rohan, an aspiring architect, was an unlikely homicide victim. But records show the black teen fits what police and activists say is a disturbing pattern in the city and nationwide.

The federal Centers for Disease Control and Prevention — based on 2014 data — reported that homicide was the leading cause of death for black males between the ages of 15 and 34.

Among the 21 New York City teenagers who died violently over the past 12 months, all of them were black or Hispanic. All but one were male, and 90% were killed by a gun. Some, like Rohan, were bystanders, while others were themselves involved in crime or victims of neighborhood beefs that spiraled out of control.

No matter the circumstances, the slain youths shared a common reality: growing up in impoverished communities where the threat of violence — or even death — remains as constant as the subway trains running down the tracks.

Although violent crime across the city continues to plummet — there were 290 homicides in 2017 compared with 335 in 2016 — violence among young people continues to be a stubborn problem.

In 2017, 24% of all homicides victims in the city were between 15 and 24 years old. The NYPD did not provide equivalent data for previous years.

The murder of the unarmed Rohan by a 17-year-old shooter devastated his relatives — many of them longtime residents of East Flatbush, where the shooting occurred.

Rohan was shot on an unseasonably warm February afternoon, with the laughter and shrieks of children echoing from sidewalk to sidewalk. There was no school, because it was Presidents’ Day. Parents kept a watchful eye from their porches. A man washed his car in the midday sun.

Rohan had never been in trouble with the police — or anyone except his mother. In eighth grade, he decided he wanted to be an architect and was scheduled to start an internship at a large city firm this past summer.

His killer emerged from a gold Honda Accord without warning as Rohan, a headphone in one ear, walked with his friends. The alleged shooter, busted in April, grew up in Rohan’s neighborhood, but police say they didn’t know each other. The suspect’s accomplices are still being sought.

Even as the NYPD reports crime at record lows, in the city’s most underserved communities, violence is a persistent fear.

A 2014-16 study by John Jay College of Criminal Justice focused on men ages 18 to 24 at community centers in Harlem; East New York, Brooklyn; South Jamaica, Queens, and the South Bronx found 43% had been stabbed or shot at.

Jeffrey Butts, director of the Research and Evaluation Center at John Jay, said access to weapons among young men inured to violence and living in poverty can lead to deadly results.

“Think about yourself and some dumb things you did when you were a teenager,” said Butts. “And then imagine living in Brownsville and walking around with a pistol in your pocket all the time. You’re 17 years old, you think you’re invulnerable, and you pull that weapon out.”

There may be signs a teenager is prone to violence — poor performance in school, trouble at home, a series of conflicts escalating in severity or arrests involving a gun. But Shea said violence among teenagers over petty conflicts is difficult to predict.

“With kids, it’s really over nothing,” he said. “It’s the Sharks and the Jets. The front of the building versus the back of the building. Keeping up historical beefs. Sometimes kids don’t understand what they’re doing, and by the time they do, it’s too late.”

While some shootings are preceded by snap judgments, others follow long-simmering feuds, conflicts which are often escalated by peer pressure.

“The attitude is, ‘If you hurt one of my people, we have to retaliate,’ ” said Sheyla Delgado, deputy director of the Research and Evaluation Center at John Jay. “It’s not about what I want to do, but how my friends expect me to react.”

A series of brawls between East Harlem crews raised plenty of red flags in the Johnson Houses and the nearby Lehman Houses.

But the warning signs weren’t enough to save Lewis Encarnacion, 17, a tenacious boxer who was fiercely loyal to his friends.

He feared the end was near after an enemy he’d beaten up in a Labor Day fight opened fire on him eight days later. The next day, he was shot to death.

Eating lunch on the day he was fatally shot, Lewis shared his fears with his best buddy, Orlando Escobar, 17.

“Yo, Bro, today feels weird,” he told Orlando on Sept. 13. “It don’t feel like I’m living. If I don’t get home, tell my mom I love her and I’m sorry for all the worries I put her through.”

It was 9 p.m. when one of one of Lewis’ Lehman Houses buddies rang his intercom looking for help: 15 to 20 kids from the Johnson Houses were threatening to kill him and his friends.

Lewis ran downstairs to join in the fray, only to get cut down by a fatal bullet moments later, just 400 feet from his home.

His mother, Belkis Perdomo, came home from work that night only to learn her son was dead.

“Life for me has no sense no more,” said Perdomo, 42, who spent many nights praying with Lewis before they went to bed. “Some part of me is gone with him. He wanted to do so much and everything vanished.”

As the hostility continues to fester between the Lehman and Johnson crews, Orlando fears it may explode in another pointless spasm of violence.

“I don’t think it’s ever going to stop,” he said. “Everyone is really angry. I don’t know what they could do.”

Activists believe violence must be treated like any other infectious disease — beginning with the understanding that it’s contagious.

Proponents of the Cure Violence campaign seek to prevent the scourge using community mentors and mediators to detect and interrupt conflicts before they lead to bloodshed and to identify young people at risk of acting out and change their social norms and opportunities.

“Violence is like the common cold,” said Andre Mitchell, the executive director of Man Up Inc., one of the first community outreach programs in the city to launch a Cure Violence program. “If somebody doesn’t wash their hands of it, they’re gonna pass it on to the next person.”

In March, her 19-year-old son, Javon Craig, was killed outside the Risley Dent Towers in Bedford-Stuyvesant, Brooklyn — 47 steps from the spot where her older son Rasheed Craig was killed eight years earlier at age 20.

The slaying of his older brother inflamed Javon and sent him down the wrong path.

“When his brother got killed, he really started falling off,” the mom said. “I still don’t think he knew how to deal with it. Any little thing would piss him off. It messed our family up.”

Javon lost interest in school and was arrested 12 times, but Craig never thought it would put his life at risk.

“They robbed and murdered my baby over a dice game,” she said. “You could’ve shot him in the leg or foot or something. You didn’t have to take him out of the world.”

While her sons are both gone and buried, their killers remain on the loose.

When the memorials are over and the bodies are in the ground, an unseen tragedy continues for the survivors. For many of these families and friends, the nightmare is just beginning.

Four months after Chantel Allen’s only son, Tylik, was shot to death on the last night of September, the 34-year-old Harlem mom is still crippled by grief.

“(His killer) on Christmas Day is gonna open up presents and my son is going to be 6 feet under the ground with a blanket on him,” Allen said in an interview last month. “Why can’t you just come out the grave and hug me?”

Tylik, 18, was shot after responding to a call to leave their building lobby and step outside.

Friends faithfully relied upon him for a joke or dance move to cheer them up. He was a young man so self-assured that it inspired confidence in his classmates.

His popularity, even in death, is evident to all visitors to a King Towers lobby, where his nickname, Ty Millz, and catch phrase, #KeepItMilly, adorn the walls with hundreds of handwritten messages stretching from floor to ceiling.

Reminders of Tylik’s truncated life dominate his mother’s two-bedroom apartment. Photos of him adorn the walls, the fridge, the back of the front door and a living room shrine.

Dozens of condolence letters crowd the kitchen table. Prayer cards hang from the lamps. His football helmet, signed in silver Sharpie by friends and teammates, sits atop the cupboard.

The slain teen’s likeness is even tattooed on his mother’s chest.

“I was hospitalized for 15 days because I wanted to hurt myself,” she said. “I wanted to be with him. I have no feelings. I just let the day go.”

Allen has struggled to sleep, eats irregularly and attends bereavement counseling five hours a day. She takes a steady regimen of medications to help deal with her anxiety and depression, and is so frightened of her neighborhood she no longer walks to the subway station alone.

Jahresse McLaurin, 17, decided to write his college admission essay in honor of his fallen friend, whose own story will forever remain unfinished.

“I’m like a broken record because no words can fix the gap in my heart,” wrote Jahresse, an aspiring criminologist. “I always had a feeling living in the ’hood would bring nothing but negative energy, but I never knew it would come to my doorstep. But Harlem is what we both knew, and anything outside of it was foreign to us.”

Nadine Sylvester, 35, the mother of Rohan Levy, still struggles with the day-to-day realities of living without her son. Time flies by or slows to a crawl without warning.

“This morning I got up and had to throw away a whole gallon of milk,” she said recently. “It spoils all the time without him.”

Sylvester moved from her home of 15 years a few months after Rohan’s murder. The neighborhood reminded her too much of the loss.

“Every time I walked there all I could think was that his blood is on the street,” she said. “In the house I would hear him coming up the stairs. You couldn’t stay there. It was haunted.”

Zidon Clarke, then 17, was charged with Rohan’s murder, assault and criminal possession of a weapon. Clarke is scheduled to appear in court Jan. 16.

Meanwhile, Sylvester has found a small measure of peace by becoming an outspoken advocate for gun control.

She is establishing a community organization to fight violence in East Flatbush, and set up the Rohan Levy Aspiring Architect Scholarship at Williamsburg High School for Architecture and Design. The fund at his former school will help send young men of color to college.

Sylvester knows it will take more than a single voice to address the gun violence that continues to claim too many lives.

“To sit and turn a blind eye to what is happening is unacceptable,” she said. “It might be your child next.”