As police continue to investigate a recent series of shootings in East Nashville and Madison, residents in the area have remained on alert, some afraid of getting caught themselves in a wave of violent activity.

But the spate of shootings doesn’t fit with a trend of declining violent crime in East Nashville.

The killings of a man and a woman who were robbed outside The Cobra bar on Gallatin Avenue early Friday morning have caused residents living in the area to think twice about walking outside at night.

The double homicide came on the heels of another man being fatally shot while walking to a bus stop in Madison, a man critically wounded by gunfire moments after that, and a woman shot two weeks ago while walking her dog in Inglewood.

“People have been a little more on edge,” said Daniel Yocum, a 25-year-old East Nashvillian who lives a mile away from Cobra and goes out to the bar at night at least once a week.

In the days since the shooting, he and others in his social circle have made plans to go out for evening entertainment in groups, rather than arriving and leaving alone, he said.

“It’s a pretty scary prospect,” Yocum said of the realization that someone innocently leaving a neighborhood bar would be gunned down. “You don’t see that kind of thing around here. It’s quite shocking and kind of disturbing.” 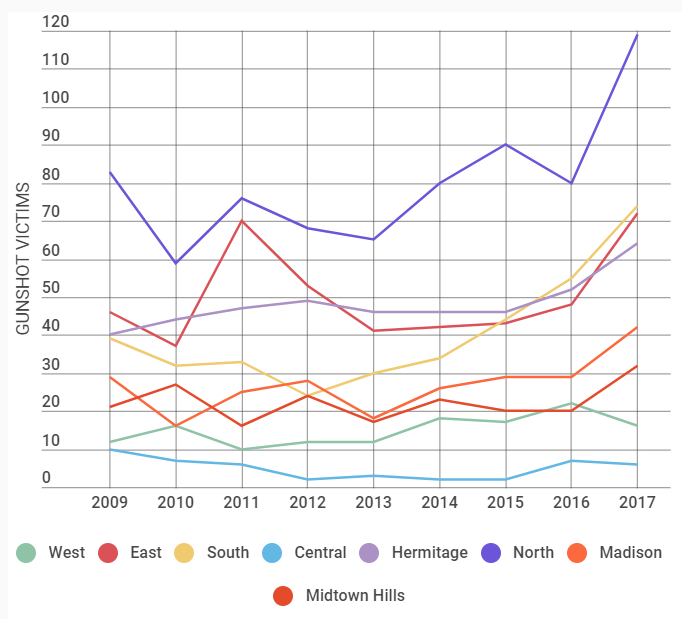 While the number of people shot throughout Nashville is on pace to hit 430 in 2018 — the highest in more than a decade — East Nashville has seen a dramatic drop in violent crime since the mid-2000s.

The number of reported violent crimes in the East Precinct dropped by nearly half, from 1,798 in 2004 to 984 in 2017, and is on track to experience even fewer this year.

Nashville as a whole also has less violent crime than it did in the mid-2000s, but it has seen an uptick in recent years. Between 2013 and 2017, violent crime increased by 12 percent across Davidson County, rising in every precinct except East and West.

Gun violence in Madison also shot up in 2017, with 42 victims injured or killed, the most since at least 2004. The precinct is expected to exceed that number this year.

Why a recent rise in crime again in Nashville?

Nashville has had record-low unemployment in recent years and the economy has been thriving, but crime has been rising.

One possibility could be there’s more opportunity for crime, said Dylan Jackson, a criminologist at the University of Texas at San Antonio.

“People are moving about, they’re going about more, they’re spending more money, they have more discretionary income,” Jackson said. “They have more opportunity to be victimized.”

That could explain a rise in property crime such as car theft, and robberies, he said.

As of Aug. 11, property crime in Nashville was up 4 percent compared with the same period in 2017. Property crime in the East Precinct is also up since 2014, and at a higher pace than the county as a whole.

Another explanation could be an affordable housing crisis exacerbated by Nashville’s booming economy, said Jeffrey Butts, the director of the Research & Evaluation Center at John Jay College of Criminal Justice. This can be particularly true for some neighborhoods.

In the Cayce Homes public housing development, a community policing grant from the Metropolitan Development and Housing Agency has allowed the police department to respond to some residents’ request for more officers patrolling on foot and by bike in the neighborhood to build relationships, Imhof said.

He pointed to a 38 percent reduction in violent crime in Cayce Homes since then. The grant program was implemented last summer.

On Monday, Nashville police took two men into custody for questioning in the deadly shootings at Cobra and in Madison.

The possible break in the case comes as each of the shootings have remained unsolved — the first of which, when the woman was walking her dog in Inglewood, happened nearly two weeks ago.

While no charges have been filed in any of the potentially connected homicide or shooting cases, Lacory Lytle, 24, and Demontrey Logsdon, 20, the men brought in for questioning, were served warrants Monday related to other alleged crimes.