Voices from the political Left and Right make cities the central focus of discussions about violence, especially gun violence. During the 2016 Presidential campaign, Donald Trump repeatedly referred to gun violence in cities. “You can’t walk on the street; you buy a loaf of bread and you end up getting shot.” Our “inner cities,” he claimed, are “more dangerous than some of the war zones” (CNN.com, October 26, 2016).

Progressive advocacy organizations rebut these warnings by publishing their own analyses of violence in urban areas. In 2017, the Brennan Center at New York University School of Law published a review of crime statistics that focused on rates of crime and violence in the “30 largest American cities.” Intentional or not, the report reinforced the idea that violence is concentrated in cities.

This is akin to saying that problems like cancer, car crashes, and teenage heartbreak are concentrated in cities, and indeed, they are—cities have more people. But, do city residents face disproportionate rates of such problems? The gun violence issue looks entirely different when viewed through the lens of per capita rates—i.e., gun homicides per 100,000 population.

Using data from the National Center for Health Statistics and the U.S. Census Bureau in the 33 states with sufficient data, this analysis tests whether states conform to the conventional narrative of “urban gun violence.” Conforming states are those with linear associations between gun homicide rates and urbanization, either perfectly linear or those in which a linear association could be achieved by changing no more than one value among the five counties with the highest gun homicide rates. (A linear relationship means the county with the highest gun homicide rate is the most urban, the county with the second highest rate is the second most urban, etc.) 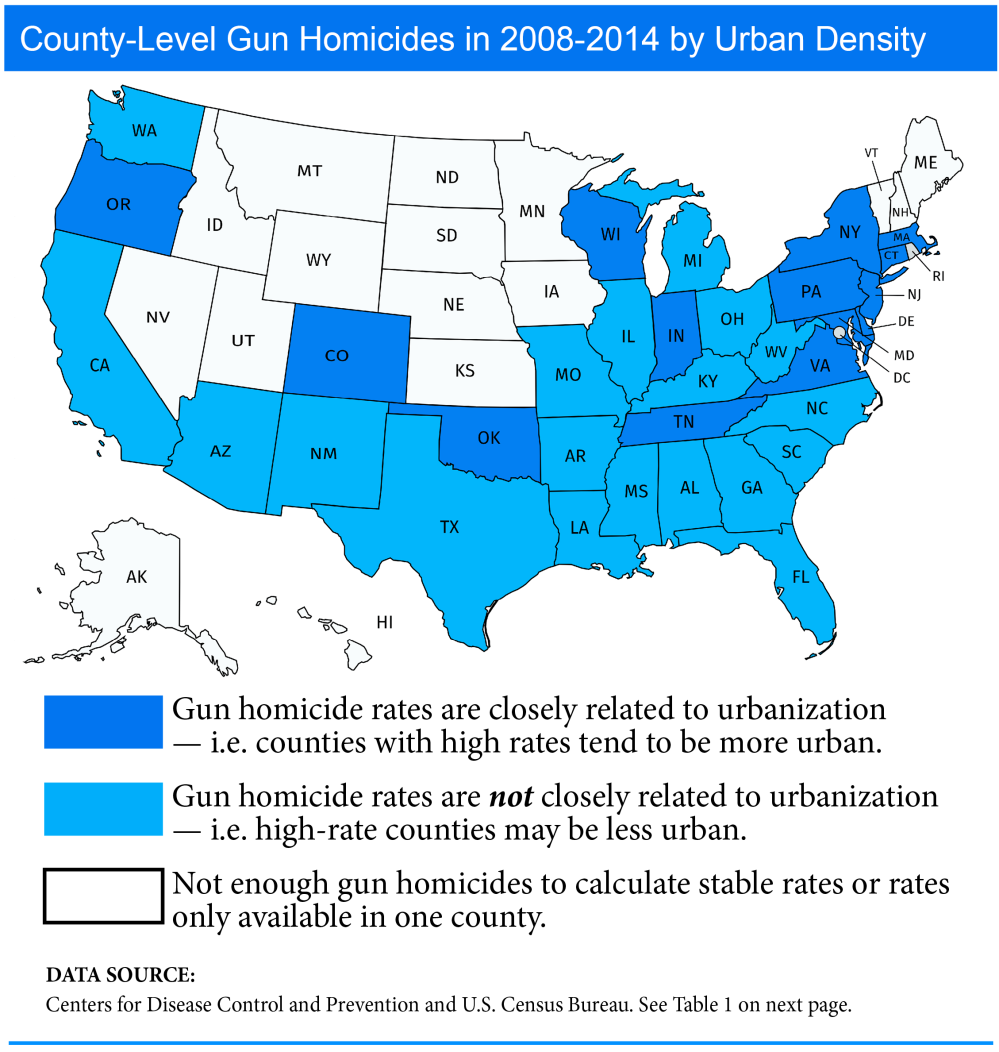 Of 33 states in this analysis, 19 failed to conform to the urban gun violence narrative. Gun homicides in those states are just as likely (often, more likely) to occur in small, rural communities (see Table 1 on the following page).

In South Carolina, for example, the highest rate of gun homicides during the years 2008 to 2014 occurred in Jasper County. With a population of 25,000 and two-thirds of those residents in non-urban areas, Jasper County’s gun homicide rate was 16.3 per 100,000. The State’s largest and most urban counties, Charleston and Richland, had gun homicide rates of 7.5 and 6.1 per 100,000, respectively.

In the remaining 14 states, gun homicides were correlated with urban density. In New Jersey, for example, the largest and most urbanized county (Essex) had the highest rate of gun murders (12.1 per 100,000) while each subsequently lower rate county had a lower degree of urbanization as well.

Most Americans live in cities, and cities are responsible for most of the nation’s gun homicides. It is incorrect, however, to characterize cities as uniquely susceptible to gun violence, and it is highly misleading to insert the adjectives “urban” or “city” before all mentions of gun violence. Using these terms to address American gun violence is an act of political rhetoric.