Savings Rate: How Wraparound Advocacy May Reduce the Consequences and Costs of State Commitment for Justice-Involved Youth

by Douglas Evans, Megan O’Toole, and Jeffrey A. Butts
March 2017

This study was supported by a grant from the Annie E. Casey Foundation of Baltimore, Maryland. Any points of view expressed in this document are those of the authors and do not necessarily represent the official positions or policies of the Foundation, the Florida Department of Juvenile Justice, John Jay College of Criminal Justice, or the City University of New York.

The results indicate that youth served by YAP were somewhat more likely to be re-arrested and adjudicated for misdemeanor offenses–a difference that could be due in part to YAP youth being scrutinized more closely after YAP services. Despite their more frequent justice system contacts, however, YAP youth were significantly less likely within two years of completing services to be committed to the state for placement by the juvenile justice agency.

This finding suggests that YAP services generate considerable savings by reducing the need for commitment and out-of-home placement among court-involved youth. Based on average lengths of stay in out-of-home placements in Florida and the actual placement settings used for committed youth in this study, we estimate that the State of Florida saves more than $2.7 Million in avoided placement costs for every 1,000 youth referred to YAP rather than DJJ probation.

With funding from the Annie E. Casey Foundation and data from the Florida Department of Juvenile Justice (DJJ), researchers compared outcomes for a sample of 249 YAP youth and a matched sample of 249 youth served by juvenile probation. All study youth were involved with the Florida juvenile justice system between 2010 and 2014.

Youth in the YAP sample were matched with youth drawn from a large pool of probation cases using a probabilistic selection routine. Researchers used the method known as “propensity score matching” (PSM) to generate two groups of youth with comparable risk profiles and similar demographic characteristics. In other words, probation cases were matched with YAP cases statistically rather than being chosen by the research team.

The study compared the samples on a number of common indicators for up to two years following their completion of services with YAP or probation. The analysis examined how youth differed in terms of subsequent arrests, court adjudications, detention admissions, commitments to DJJ, and transfers to criminal court. This allowed the study to estimate the relative effects of YAP services and probation supervision for similarly situated youth.

The study compared former YAP participants with former youth probationers using retrospective data. Researchers began the study by contacting YAP, Inc. to obtain identifying data about several hundred of the program’s former clients. YAP provided data for youth who began and completed an initial period of services any time between 2010 and 2014.

Information about the YAP clients (name, date of birth, home address, agency ID number, etc.) was sent to DJJ data managers who located their own records for those youth and created a de-identified database summarizing all previous and subsequent justice contacts with each youth (arrests, adjudications, risk scores, commitments, etc.).

Researchers from DJJ then used the same file format to compile a database with information about 7,338 juveniles probationers who started and completed supervision in Orange County between 2010 and 2014. This second de-identified database provided the pool from which matched cases could be drawn for comparison with YAP cases.

Comparison of the two samples revealed few significant differences. Youth served by YAP, however, had more mental health diagnoses, more frequent suicidal ideations, and more extensive histories of physical and sexual abuse compared with the probation sample. This may suggest that YAP served a more challenging client population even after matching on demographics and the risk scores used in the juvenile justice system.

When the study examined subsequent justice contacts among both groups, some differences appeared to favor probation. Within the two-year follow-up period, for example, YAP youth were arrested significantly more often than were probation youth. Seven of 10 YAP clients (171 of 249, or 69%) were arrested at least once in those two years, compared with 144 (58%) probation youth. YAP youth were also significantly more likely to have at least one detention admission during the 2-year follow-up period (46% versus 39%). Other differences, such as subsequent court adjudications—while still favoring probation—were not statistically significant.

The YAP group was more likely to be arrested for misdemeanors (45% versus 30%), but there were no significant group differences in felony arrests. This could suggest that participation in YAP, Inc. increased youths’ exposure to behavioral scrutiny and law enforcement attention. In other words, YAP clients may have been watched more closely than probation clients, which in turn could have led to more frequent arrests for less serious infractions. 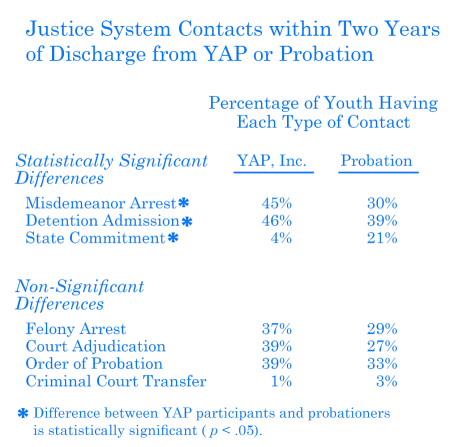 The most consequential difference was observed in the rate of subsequent commitments. When youth are committed to a state agency following an appearance in juvenile court, they are under the legal custody of state authorities and may be removed from their homes and placed in a range of residential settings, including potentially expensive secure facilities.

During the two-year follow-up period, probation youth were significantly more likely to experience a state commitment than were YAP youth (21% versus 4%). In other words, probation clients were five times more likely to be committed within two years after receiving services.

The different rate of post-supervision commitment may have considerable cost implications. According to Florida’s DJJ, committed youth are most often placed either in “secure” or “non-secure” programs and facilities. Based on the per diem cost and average length of stay in both placement types, the cost of one juvenile commitment ranges from $43,625 to $77,071 with most of the difference being due to varying lengths of stay. Researchers used the expected daily costs of secure versus non-secure placement ($197 and $194) and the average length of stay in each setting (392 days and 225 days, respectively) to calculate the costs of commitment. Eleven YAP clients were committed at an estimated cost of $546,769 while fifty-two probation youth were committed at a cost of $2,335,405.

Applying this estimate to a larger population, the analysis suggests that Florida may save $2.7 Million in commitment costs for every 1,000 youth referred to YAP, Inc. instead of probation. A more complete estimate, of course, would have to account for other factors. Clients of YAP, Inc. are more likely to be arrested for minor offenses. These costs would have to be subtracted from the estimated savings. The use of probation, however, also generates costs. If all costs of providing services through YAP, Inc. are included in an economic analysis, the full costs of probation would have to be included as well.

Despite their greater service needs and more frequent justice contact, YAP youth were significantly less likely than probation youth to be committed to the state juvenile justice agency within two years of completing services. This study suggests that YAP, Inc. not only prevents court-involved youth from experiencing out-of-home placements, but a period of YAP services may generate considerable savings as well.

Lum, Cynthia and Yang, Sue-Ming (2005). Why do evaluation researchers in crime and justice choose non-experimental methods? Journal of Experimental Criminology, 1(2), 191-213.

Douglas Evans is associate professor at Mercy College in New York as well as a visiting scholar and project director with the John Jay College Research and Evaluation Center.

Megan O’Toole is a Ph.D. student in the Graduate Center, City University of New York and a research fellow with the John Jay College Research and Evaluation Center.

Jeffrey A. Butts is director of the John Jay College Research and Evaluation Center.