Vox—Trump: Murder is at a 45-year High. Actual Statistics: That’s not Remotely True.

Donald Trump on Tuesday made an incredibly alarming claim to supporters at a rally in Florida: “Do you know it was just announced that murder is the highest it’s been in our country in 45 years?”

That would be very worrying if it were true. Thankfully, it’s not. At all.

So no, murder is not at the highest it’s been in the US in 45 years. Not even remotely close. 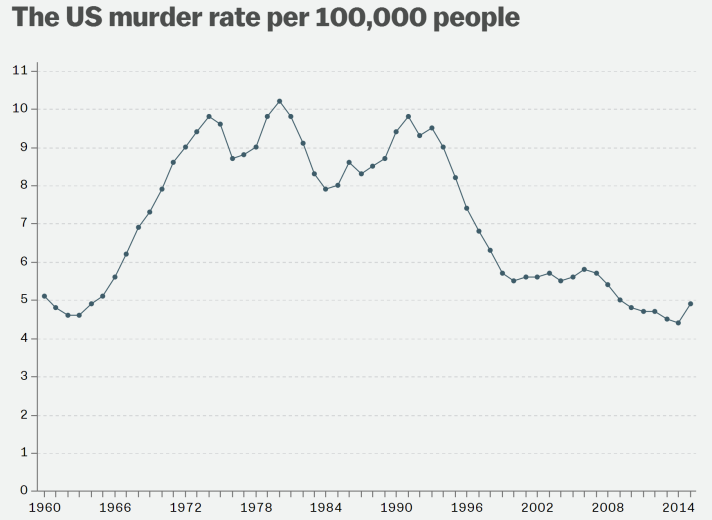 One possibility is Trump was trying to say that murder in 2015 saw its highest increase in 45 years — a claim he made at the second presidential debate. As PolitiFact found, this is mostly accurate: The number of murders rose by 10.8 percent from 2014 to 2015, the highest since an 11.1 percent spike from 1970 to 1971.

But it’s important to put this in context. Back when the number of murders increased by more than 11 percent in 1971, the rate rose from 7.9 to 8.6. This not only continued what was already a near-decade of increases, but it was part of a huge crime wave that lasted all the way to the 1990s, when the crime and murder rates began to drop.

Other crime rates reported by the FBI also didn’t see nearly as pronounced of changes: The violent crime rate went up by 3 percent (to 372.6 per 100,000 people, which is still below 2012’s levels), rape by 4 percent, aggravated assault by 4 percent, and robbery by less than 1 percent. Burglary and larceny rates dropped — with property crime rates falling to levels lower than any point after 1966. (One caveat is the murder rate is more accurate than other crime figures; it’s more likely police and victims are underreporting other types of crime, whereas a dead body is difficult to ignore.)

That’s not to say the 2015 murder increase isn’t alarming. Criminologists say it’s worth paying attention to, although we don’t really know why the rate increased in 2015 just yet. As John Jay College criminologist Jeffrey Butts put it to the Guardian, “You lost 50 pounds. You gained back a couple. You’re not fat. That doesn’t mean you shouldn’t look at your behavior, because the trend is not good.”

But paying attention doesn’t mean we need to exaggerate the level of increase and suggest America is now facing a massive, historical murder wave. After all, even after the increase in 2015, the murder rate is still lower than it was at any point during the 44-year period from 1965 to 2009. It’s still pretty safe, historically speaking, to be an American.