In Coplay Borough, where American flags line the streets and cheerful banners welcome visitors, police Chief Vincent Genovese doesn’t like what he’s been seeing on his police reports.

The town of 3,300 residents is hardly crime-ridden, but there’s been an uptick in juvenile crime. The top cop with 11 years on the job isn’t sure why. But he thinks he has a solution.

Genovese said a curfew, if not capable of bringing crime rates down, might at least expose whatever problem is at the center of the rise in incidents. 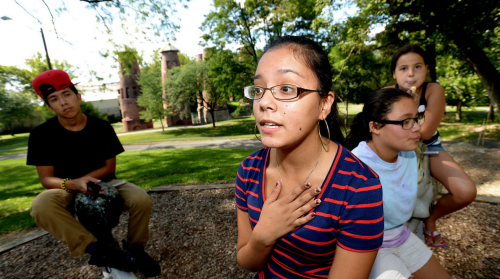 “We’re trying to preserve these kids’ youth and protect them from bad decisions,” Genovese said. “If it doesn’t help, I’d be the first to say let’s rescind this and try something new.”

Coplay Council has agreed to discuss the idea at its Tuesday workshop meeting. Councilmen Charlie Sodl and Stephen Burker said they support exploring such a move.

“I feel we as a government need to protect our citizens,” said Sodl. “If this is one way to do it or help do it, then I think we have an obligation to do it. I haven’t heard anyone come up with a better idea.”

But Councilman William Leiner Jr. said he’d never agree to a law that “curtails individual rights” and “smacks of a nanny state.”

“They can really often be counterproductive,” said Alex Koroknay-Palicz, a spokesman for the National Youth Rights Association based out of Washington D.C.

“They really do nothing to stop crime and they just further increase whatever alienation that young people might feel,” he said.

Nobody knows how many towns have juvenile curfew laws. Over the years, many places have adopted them only to let them languish on the books. Others have had them tossed out by judges.

Allentown has a daytime curfew that was passed in 1995 to keep truant students out of trouble. It bans minors from being in any public place or any establishment in the city between 9 a.m. and 2:30 p.m. on school days.

An evening curfew law passed in 1991, however, was declared illegal in 1997 by a Lehigh County judge. The city passed another version in 1997, but it was rejected by a federal judge later that year.

Coplay officials are looking at Walnutport’s curfew ordinance — in place for decades — as a possible model. That law prohibits minors from wandering around the borough between 10 p.m. and 6 a.m., but offers many exceptions such as an emergency.

Walnutport police Chief Peter Wayda said the ordinance is not routinely enforced, but is a handy tool when police need one. On the occasions where it has been used, Wayda said police officers have issued warnings to offenders, though the law allows for fines between $100 and $1,000.

Genovese thinks Coplay could use such a device to gain the upper hand on juvenile crime.

In 2010, Coplay arrested 16 juveniles for 15 incidents and watched those numbers drop as patrols were increased, Genovese said. In 2014, he said there were seven juvenile arrests involving seven incidents.

But so far this year, the number has ballooned to 14 arrests for 10 incidents, the chief said. If he counted six incidents where victims declined to press charges, the number of juvenile arrests would be 28, he said.

“For a community of this size, this was alarming,” Genovese said.

Most of the arrests involved drugs and thefts, and the majority took place at night with suspects who didn’t live in the borough.

When Coplay officers come across a group of young people wandering through the borough in the early morning hours, Genovese said they can’t intervene unless someone is breaking a law. The chief believes that some crimes might be prevented if police could send the minors they encounter home.

Teens in Coplay were skeptical that a curfew could do any good.

Mishaly Ponce Munoz, 16, and Angel Rotz, 17, both of Coplay, said a curfew could encourage troublemakers to break more rules and punish those breaking none.

Rotz said nighttime trips to Giant, often at his parent’s request, could now become a chance run-in with police.

Munoz had strong words for those young people breaking laws, but didn’t understand why everyone should be punished for behavior of a few.

“It’s just going to get more kids in trouble for no reason,” she said. “Some kids need to get out sometimes because of things happening at home.”

If violators are from out of town, Adams said police could be burdened with taking home minors from miles away or clogging the police station by housing them until they can find a suitable guardian.

Adams said it would be more effective to bring in social programs to directly confront problems that drive kids out of the home at early in the morning such as drugs, homelessness and mental health issues.

“Sometimes home is not safe for these kids. We have a very ‘Leave It To Beaver’ idea of family life sometimes and that just isn’t reality,” Adams said.

But Genovese said Coplay’s size is actually an advantage in this case. He doesn’t foresee an overwhelming burden for police enforcing the ordinance and said his department would be able to delve deeper into cases that might otherwise become too taxing for a larger city.

The curfew, Genovese said, could actually help open the door for police to investigate some of the root problems and unsafe home conditions.

But Jeffrey A. Butts, director of the Research & Evaluation Center at John Jay College of Criminal Justice, said data has shown that the more contact a young person has with the criminal justice system, the more disadvantages they experience in life — even compared with a person with a similar chaotic life.

While the ideal vision of the system is one of rehabilitation and correction, Butts said that’s not how much of the juvenile system works.

Juveniles who get a record could head farther down a path of trouble and become increasingly leery and defiant of law enforcement, Butts said. Non-punitive intervention is best, he said.

Genovese said that’s what he hopes to do with a curfew.

“We’re trying to protect them from themselves so they don’t have that bad contact with police where they only deal with us for arrests,” Genovese said of the youth. “I’ve seen too many kids ruin themselves.”

Studies show, he said, that people are far more likely to follow the law and change their behavior when they believe police are being fair. Severity of punishment, he said, doesn’t have the same effect and a perception of bias can invite more disobedience.

If a department can balance that fine line of even-handed and compassionate enforcement, Butts said a curfew might not be destined for failure.

This, Genovese insists, is his aim.

“I’m concerned for the kids,” the chief said. “To me that means keeping them from getting into a bad situation or some kind of trouble.”

Borough resident Scott Gillespie, 54, can see how a curfew could help police and even parents enforce rules at home. The father of two adult children, Gillespie said young people crave boundaries – even if they don’t realize it.

Parents ought to be the ones watching out for their own children, but Gillespie said not every home life is a structured and safe one. As long as police use “common sense,” a curfew could work, Gillespie said.

“Obviously, nothing good happens after midnight,” said Gillespie. “As a parent you want to know where your children are.”